Black Flour is the creation of a husband-and-wife team,

Marie and Jamie moved to Los Angeles from Paris two years ago seeking to continue their adventure in the restaurant business in what they felt was the most exciting culinary environment in the world. They spent months looking for the perfect spot to open Black Flour as a brick and mortar restaurant; traversing LA with their real estate agent visiting available shops in neighborhoods from Venice Beach to Culver City; from Silverlake to Downtown LA. While Marie discovered a new city, Jamie rediscovered an ever-changing landscape so diverse, vital and dynamic that they both came to the conclusion that choosing a single location would be inconceivable. They started to throw around the idea of building their business out of a food truck that could change locations and establish the Black Flour name throughout the sprawling jumble that makes up Los Angeles. 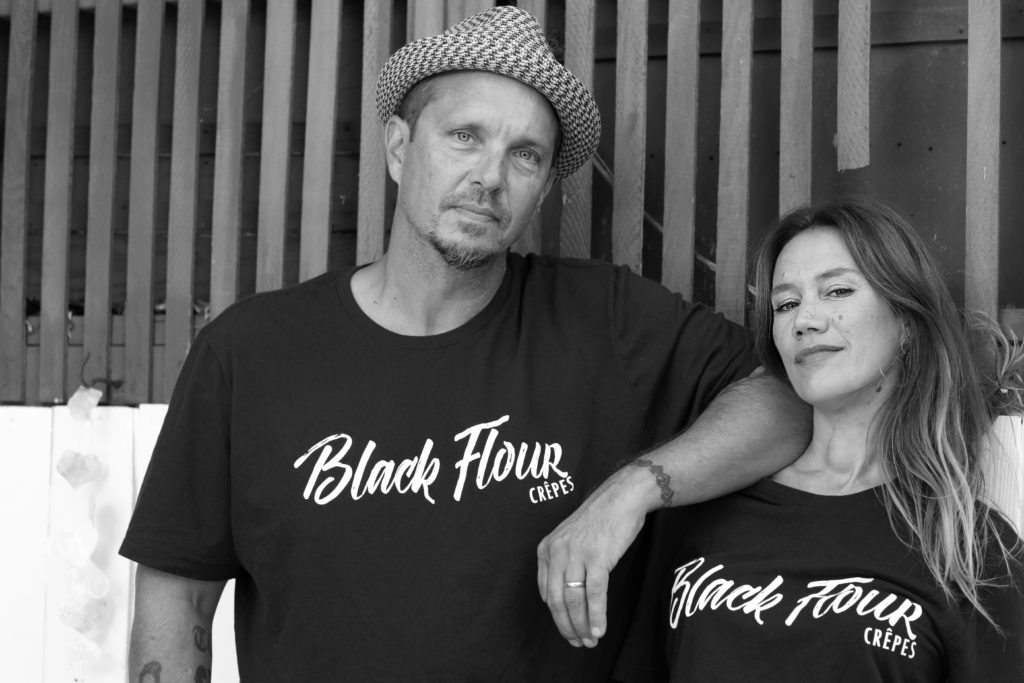 Before becoming a leader of the French foodie revolution in the mid 2000s, Marie used to be a successful actress both on the screen and in the greatest Parisian theaters. Jamie always knew that he wanted to cook; from the high-end Locke-Ober in Boston to Jerry’s and Cafe Luxembourg in Manhattan, as well as a few Mexican joints in California.

Together, Marie and Jamie founded Pink Flamingo Pizza, a gourmet pizza concept with six locations throughout Europe.  With a combination of surprisingly creative menu, unique vibe of all their stores, and the famous «balloon delivery» system; Pink Flamingo became one of the must-do things in Paris.

Mentioned in numerous city guides including  Lonely Planet, written up in press ranging from Le Parisien to the New York Times, to even as far as the LA Times and featured on  Travel Channel.

After the success of Pink Flamingo, Jamie and Marie decided to introduce Parisians to real American-style BBQ; Floyd’s Bar & Grill was born. Even the New York Magazine mentioned it as one of the best restaurants to try American style BBQ in Paris.

Floyd’s Bar & Grill continues to flourish and has become a reference in Paris for customers on the hunt for quality meats and whiskey in an unusual and unexpected setting.